With the new La Florida plant, the nation's solar power production is now equivalent to output of a nuclear power station 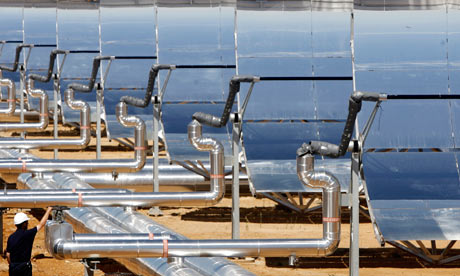 A worker makes adjustments before the inauguration ceremony of a solar thermal power plant in Alvarado Spain. The plant is the world's biggest solar power station. Photograph: Nacho Doce/Reuters

Spain is a world leader in renewable energies and has long been a producer of hydro-electricity (only China and the US have built more dams). It also has a highly developed wind power sector which, like solar power, has received generous government subsidies.

The new La Florida solar plant takes Spain's solar output to 432MW, which compares with the US output of 422MW. The plant, at Alvarado, Badajoz, in the west of the country, is a parabolic trough. With this method of collecting solar energy, sunlight is reflected off a parabolic mirror on to a fluid-filled tube. The heated liquid is then used to heat steam to run the turbines. The mirror rotates during the day to follow the sun's movement. The solar farm covers 550,000 square metres (the size of around 77 football pitches) and produces 50MW of power.

Protermosolar, the association that represents the solar energy sector, says that within a year another 600MW will have come on-stream and projects that by 2013 solar capacity will have reached 2,500MW.

The northern, though thinly populated, region of Navarra is already producing 75% of its energy from a range of renewables, including wind, solar, hydro and biomass. Spain's windfarms now produce around 20,000MW of electricity and on one day in November they accounted for 53% of demand. Last year, solar energy met 2.8% of demand out a total of 12.9% for all renewables. In March, the government announced a plan to increase the renewable share to 22.7% by 2020, slightly ahead of EU targets.

With an average of 340 days of sunshine a year in Spain, solar is more reliable than wind, and can go a long way towards weaning the country off gas-fired and ageing nuclear power stations. Spain is now the fourth largest manufacturer of solar power technology in the world and both solar and wind power technology exports have become valuable earners in a country with a weak manufacturing

Win a date with history

Find the latest jobs in your sector:

Spain had one of the world's most ambitious – and generous – plans to boost the amount of electricity it generates from the sun, but that dream has faded